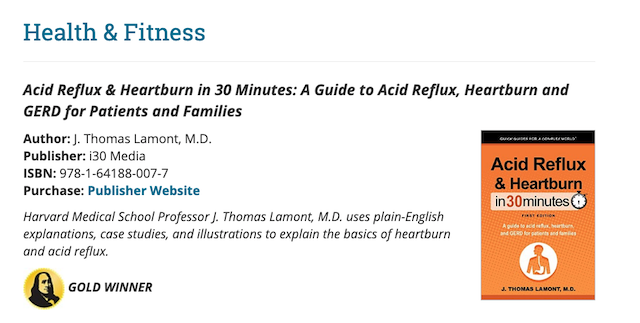 The Independent Book Publishers Association (IBPA) last week announced that Acid Reflux & Heartburn In 30 Minutes: A guide to acid reflux, heartburn, and GERD for patients and families has been named the recipient of a gold Benjamin Franklin award for excellence in publishing. Publisher i30 Media Corporation accepted the award at IBPA’s annual conference and award ceremony in Chicago.

The book, authored by J. Thomas Lamont, M.D. of Harvard Medical School, was the winner in the health & fitness category. Other category finalists included books published by Johns Hopkins University Press and the American Academy of Pediatrics.

According to IBPA, some 1,500 titles were submitted for consideration in this year’s competition, covering 54 categories. Ben Franklin judges included approximately 160 publishers, editors, and other independent publishing professionals.

“This is fantastic news, and this is a great honor,” said Lamont. “I certainly would not have written the book without the invitation of publisher i30 Media.”

Acid Reflux & Heartburn In 30 Minutes (ISBN 978-1-64188-019-0) uses plain-English explanations, case studies, and illustrations to explain the basics of heartburn and acid reflux, including causes, diagnosis, and treatments. Kirkus Reviews selected the title to be featured in its June 2018 issue, noting three strengths to the work: “The writing takes complicated subject matter and makes it easy to comprehend; stock illustrations augment the text; and the content is extremely focused.”

Acid Reflux & Heartburn In 30 Minutes is available in paperback, hardcover, and ebook editions. The official book website also contains a glossary of medical terms related to acid reflux and heartburn.

Last week I flew to Portland to attend the Independent Book Publishers Association annual conference, Publishing University. I have attended in the past, but this time was special: In 30 Minutes guides was picking up a Ben Franklin award for Genealogy Basics In 30 Minutes, by author Shannon Combs-Bennett!

IBPA’s Benjamin Franklin awards are well-known in the independent publishing community. Submissions are judged by multiple people according to very specific criteria, and the competition is fierce: This year, there were 1,300 submissions across several dozen categories. Genealogy Basics In 30 Minutes was one of only three titles to make it to the final round in its category (crafts & hobbies) and we were very happy to be awarded a Ben Franklin silver award (congratulations to the gold winner in our category, Bricks, Cobblestones and Pebbles: A Path to Modern Quilts by author Gyleen X. Fitzgerald, as well as the other finalist, Building Block Dress: A Sewing Pattern Alteration Guide by author Liesl Gibson).

Shannon and a friend joined me at the awards ceremony–it was actually the first time I had ever met her in person–and we really had a great time talking about genealogy, history, and some favorite historical dramas. I did not know this, but Shannon and her friend are experts on period historical dresses and were able to answer a question that I had long wondered about–why do the men in the PBS drama Wolf Hall have such heavy clothes? Answer: It was a mini-ice age in Europe in the 1520s!

Congratulations to Shannon for all of her hard work in preparing a manuscript, rewriting the draft, providing materials, and answering questions from me and the copy editor. The guide has been a great help to many readers (including one as far away as Australia!) and it made me proud to see her accepting the Ben Franklin award.

I have some news to share: I have been named to the board of the Independent Book Publishers Association (IBPA) for a two-year term, beginning July 1, 2015. The IBPA press release has more details.

I first learned about IBPA after submitting a book to the Ben Franklin Awards program operated by IBPA. The book did not win an award, but I gained something even more important: membership in an organization that is truly aligned with the needs of the independent publishing ecosystem.

While I have worked in various media ventures for decades, I am relatively new to the world of books and ebooks, and still have a lot to learn. Thanks to IBPA’s excellent Independent magazine and the IBPA LinkedIn group, I was able to get up to speed on so many aspects of this industry, especially those related to the business of publishing. The authors of the articles and the IBPA members I have interacted with are true professionals, and the information and advice they shared was invaluable.

I also began to take advantage of the many member benefits offered by IBPA, such as:

Through these and other activities such as Publishing University I began to understand that IBPA’s motto, “to help each other achieve and succeed,” is not just a well-meaning phrase. It manifests itself in the many ways the organization conducts its affairs and serves its constituents.

Serving on the board is a way to give back to IBPA and its members, through assisting with IBPA programs, reviewing strategic plans and the organization’s financial health, contributing to the setting of future priorities, outreach, and other activities. It is an honor to be named to the board, and I look forward to serving as a director.