I have some news to share: I have been named to the board of the Independent Book Publishers Association (IBPA) for a two-year term, beginning July 1, 2015. The IBPA press release has more details.

I first learned about IBPA after submitting a book to the Ben Franklin Awards program operated by IBPA. The book did not win an award, but I gained something even more important: membership in an organization that is truly aligned with the needs of the independent publishing ecosystem.

While I have worked in various media ventures for decades, I am relatively new to the world of books and ebooks, and still have a lot to learn. Thanks to IBPA’s excellent Independent magazine and the IBPA LinkedIn group, I was able to get up to speed on so many aspects of this industry, especially those related to the business of publishing. The authors of the articles and the IBPA members I have interacted with are true professionals, and the information and advice they shared was invaluable.

I also began to take advantage of the many member benefits offered by IBPA, such as:

Through these and other activities such as Publishing University I began to understand that IBPA’s motto, “to help each other achieve and succeed,” is not just a well-meaning phrase. It manifests itself in the many ways the organization conducts its affairs and serves its constituents.

Serving on the board is a way to give back to IBPA and its members, through assisting with IBPA programs, reviewing strategic plans and the organization’s financial health, contributing to the setting of future priorities, outreach, and other activities. It is an honor to be named to the board, and I look forward to serving as a director.

As the founder of i30 Media Corporation, which publishes In 30 Minutes guides, I wanted to write a quick post outlining some of our accomplishments in 2013, and look ahead to 2014.

Readers were impressed. You can see the reviews on Amazon and in Goodreads, but I also received emails from people who really liked the In 30 Minutes concept of easy-to-understand guides to mildly complex topics. The tone, the humor, the screenshots, the low price — all of these elements made for a great package that resonated with people all over the world. When I started getting messages from readers who had spontaneously purchased multiple titles, I knew that I was on the right track.

There were other developments. Importantly, the guides expanded from just one author (me) to a total of four. The new authors incude Melanie Pinola, Derek Slater, and Dr. J. Thomas Lamont. I would like to thank all of them for their hard work in getting their manuscripts ready for publication, and helping with various promotional efforts. They proved themselves to be true professionals, not only in their ability to work within the In 30 Minutes format, but also in the creation of high-quality content that helped readers understand mildly complex topics in a relatively short period of time. Melanie even won an award for her efforts (see LinkedIn In 30 Minutes Honored In The 2013 USA Best Book Awards).

Sales of certain titles have been steady. A few of the guides have gotten into the “Top 100” lists in various categories in Amazon, and the company has been profitable since the beginning. Authors are rewarded for their hard work with a generous royalty rate (if you’re interested in learning more, read this post for prospective authors), and the proceeds have helped i30 Media expand into new topic areas (more on that below).

I have to admit not every title has sold well. I’ve written about the struggles with Excel Basics In 30 Minutes elsewhere (see “Using metrics to turn around a failing title” in my PBS MediaShift post How to Boost E-Book Sales by Tracking Marketing Tactics). I have also taken one title out of circulation (iPod Touch In 30 Minutes) and relaunched Online Content Marketing In 30 Minutes. I won’t analyze what happened with those guides here, but I am happy to say that in the case of the latter title, author Derek Slater and I have repurposed some of the content into a new short-read format, titled Content Marketing: Recycling & Reuse – How your best online content can attract and engage new customers. These types of experiments speaks to the Lean Media philosophy I have imbued into this venture, which involves constant iteration, close communication with authors and other stakeholders, and learning from both successes and failures. 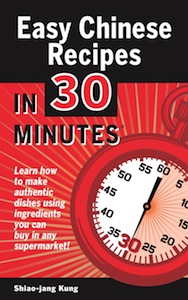 What does 2014 hold? January will see a slew of new releases, including Easy Chinese Recipes In 30 Minutes and the short chapter about content marketing recycling mentioned earlier. Windows 8 Basics In 30 Minutes is currently being written by a new author, and may come out by the end of the month.

I will also continue the Lean Media spirit of innovation and constant experimentation in everything we do. In the publishing front, I am preparing the first In 30 Minutes title with embedded video (Easy Chinese Recipes In 30 Minutes) as well as expansion into new topic areas. I have some interesting things lined up in the sales & marketing arena, including expansion of educational licensing and an interesting partnership in the works for one title (sorry, I can’t reveal details yet!). I am also reaching out to new retail partners, who I think will appreciate In 30 Minutes concept for their customers. I have also started writing a personal-finance focused title, scheduled for release in the spring.

As always, I appreciate the feedback from readers and observers alike. Post comments below, or email ian -at- in30minutes dot com to share your thoughts.

Educational License for LinkedIn In 30 Minutes

New paperback edition of PATRICK released in the U.S.

New paperback edition of PATRICK released in the U.S.

Newton, Mass., October 21 – Publisher i30 Media has just released a new paperback edition of PATRICK by author Kevin G. McGuire. The novel, set in New York in the 1980s, relates to a story of a young man using a wheelchair who has several coming-of-age experiences during a visit to a New York City hospital. The author’s statement about the book and how it relates to his own experience growing up is published below.

The i30 Media edition of PATRICK (ISBN 978-1939924094) can be purchased online via patricknovel.com or in bookstores around the country. International editions will be available in November.

In 1968, at the age of seven, I was struck by an intoxicated driver while playing baseball. This accident left me paralyzed from the waist down and has since forced me to use a wheelchair. Every summer following the accident, I was required to check into a New York City hospital for one week of physical evaluations and tests.

At this hospital, I was treated by the same physical therapists, nurses, and doctors; I was also assigned the same room. This room was invariably occupied with individuals who were from different ethnic, social, and economic backgrounds. They were admitted to the hospital for various reasons.

I quickly realized that no matter how different my roommates were, the bonding that took place during these short visits was incredible. It was amazing both in celerity, as well as intensity. Our injuries, sicknesses, and the hospital room seemed to insulate us from the prejudices and hatred of the outside world.

I also discovered that as quickly as this bonding took hold in the hospital room, it left just as quickly as we returned to our natural environments. All the promises about visiting and keeping in touch vanished as soon as we were discharged. More importantly, the prejudices that dissipated within our hospital boundaries reappeared as we left our cocoon.

At the age of seventeen, I shared the most intense seven days of my life with three roommates at this New York City hospital. I will always love but will never see or talk with my roommates again.

I entered the hospital that week not yet an adult, but left no longer a child.

PATRICK is inspired by those seven days.

For more information about PATRICK, please visit the official PATRICK website located at patricknovel.com. For other inquiries, please contact Ian Lamont at i30 Media at ian@i30media.com or 617 213-0811.