There are several ways to save text from non-Latin character sets in Google Docs. The method I usually use is through the operating system. Windows and Mac PCs let users change the input language so people can use their keyboards (or trackpad) to enter Chinese, Arabic, Hindi, etc., into any program on their screen. However, if you don’t have this feature set up or are unable to activate it (for instance, because you are using someone else’s computer) you can use language support that’s built into Google Docs. Here’s how:

Example of how to type other languages in Google Docs

In the example below, I used the Google Docs input tool to select pinyin, a romanization method for Chinese characters. As I type pinyin on the English keyboard, choices for the possible characters show up below the cursor with numbers to make a choice (Mandarin has many homonyms, so the numbers are used to pick the right characters). I can type the number or use my mouse to make my choice, and they are entered into the document. In the example below, I have typed “Hello I am American” above some English text. The input tool drop-down is also visible: 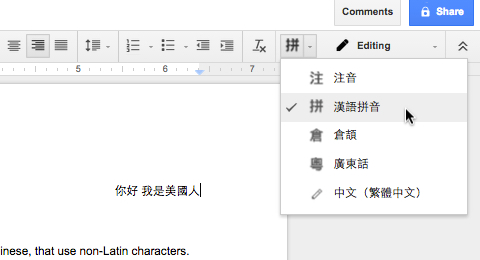 Note that this method works for me because I am familiar with pinyin. However, some languages require special keyboards or keyboard labels. If you are working with a standard Western-style keyboard, or don’t know the Romanization system supported by Google Docs, you may have a tough time expressing yourself in the other language.

The IN 30 MINUTES Starter Library