Dragging and dropping files in Google Drive to the desktop

By Ian April 25, 2021 Blog
No Comments
I had a great question from a reader of Google Drive & Docs In 30 Minutes and dragging and dropping files in Google Workspace. The reader asked:

I recently purchased a Chromebook in a move to replace my Dell Laptop using Microsoft Office. I’m in the process of going through your guide and hopefully it will help me understand the use of the Google software and some structure of the Chrome OS. My biggest hangup right now is understanding when I’m working on this computer and when I’m actually working in the cloud. I wish they labeled the Drive and My Files differently to give me that feeling where I’m at and using their software. I’m used to manipulating files, dragging and dropping, making new folders, bringing in new files via USB and email attachments, and I see that does not work in every instance here (drag/drop). It is not the feel that I’ve had for years (C: A: D: E: drives) knowing where I’m working.

I totally understand where this reader is coming from. I, too, grew up with the concept of “C drives” or “Documents” folders on desktop operating systems.
Google does things differently with Google Drive and other applications in Google Workspace. The diagram below explains the basic idea. 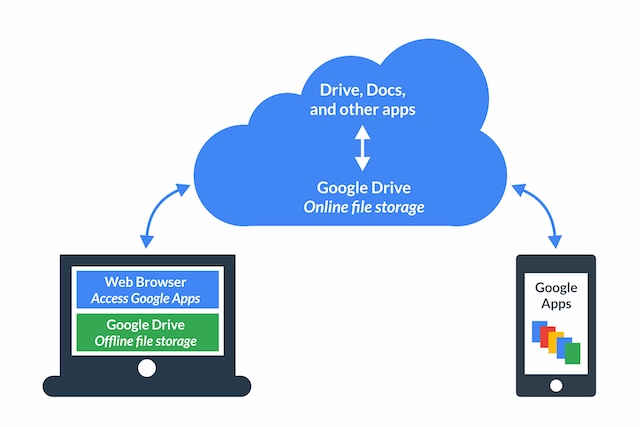 In most cases, the document you are working on is stored in Google’s cloud and is updated (via a live Internet or mobile connection) as you make changes or type. Another thing you may have noticed is larger files will take a long time to load, which is caused by the document being downloaded over the Internet. Or, if you paste in a large image, it will take a few seconds as the image is uploaded to Google and rendered in the document.
The desktop file system doesn’t really work the same way. Google Drive does have offline storage for desktop computers, which allows you to drag and drop files from different locations using File Explorer/Finder, but I have found it is buggy or imperfect on both Windows and macOS. For this reason, I use Dropbox for cloud syncing of many types of non-Google files, which works better on my desktops than Google Drive or OneDrive.
It’s worth noting that Chromebooks work differently, in that they were not designed for local file storage at all – Google really wants to you to think of the documents as living in the cloud, and not deal with downloading anything (you can do it, but it’s a pain).