Last week I flew to Portland to attend the Independent Book Publishers Association annual conference, Publishing University. I have attended in the past, but this time was special: In 30 Minutes guides was picking up a Ben Franklin award for Genealogy Basics In 30 Minutes, by author Shannon Combs-Bennett!

IBPA’s Benjamin Franklin awards are well-known in the independent publishing community. Submissions are judged by multiple people according to very specific criteria, and the competition is fierce: This year, there were 1,300 submissions across several dozen categories. Genealogy Basics In 30 Minutes was one of only three titles to make it to the final round in its category (crafts & hobbies) and we were very happy to be awarded a Ben Franklin silver award (congratulations to the gold winner in our category, Bricks, Cobblestones and Pebbles: A Path to Modern Quilts by author Gyleen X. Fitzgerald, as well as the other finalist, Building Block Dress: A Sewing Pattern Alteration Guide by author Liesl Gibson).

Shannon and a friend joined me at the awards ceremony–it was actually the first time I had ever met her in person–and we really had a great time talking about genealogy, history, and some favorite historical dramas. I did not know this, but Shannon and her friend are experts on period historical dresses and were able to answer a question that I had long wondered about–why do the men in the PBS drama Wolf Hall have such heavy clothes? Answer: It was a mini-ice age in Europe in the 1520s!

Congratulations to Shannon for all of her hard work in preparing a manuscript, rewriting the draft, providing materials, and answering questions from me and the copy editor. The guide has been a great help to many readers (including one as far away as Australia!) and it made me proud to see her accepting the Ben Franklin award.

In a single sitting, readers will learn how to plan and execute successful crowdfunding campaigns on Kickstarter, Indiegogo, GoFundMe, and other online platforms. Epstein explains different types of crowdfunding projects, including entrepreneurial startups, creative or artistic projects, charities and community causes, individual support campaigns, and patronage funding. The guide also covers budgeting basics as well as realistic goal-setting, not to mention the importance of preparing professional-looking campaign assets such as video clips, photographs, and calls-to-action.

Throughout Crowdfunding Basics In 30 Minutes, Epstein cites his extensive experience organizing crowdfunding campaigns as well examples from some of the hundreds of other campaigns he has backed. Images, tables, and charts help illustrate additional concepts.

Crowdfunding Basics In 30 Minutes is available now in paperback and ebook editions for Kindles, iPads, and other mobile devices.

Announcing an updated version of our unofficial iPhone user guide

Publisher i30 Media has released an updated version of its iPhone user guide. Authored by Ian Lamont, iPhone Basics In 30 Minutes covers the current iPhone hardware lineup including the iPhone 6S, iPhone 6S Plus, iPhone 7, iPhone 7 Plus, and the iPhone SE. It also explores the iOS operating system, Apple services such as iCloud and Siri, and important apps such as Phone, Photos, Mail, and Maps. Finally, it provides reviews of nine powerful apps that many new iPhone owners may never have heard of, such as Waze and Wunderlist.

Written in plain English with a touch of humor and lots of images, this iPhone user guide covers basic setup, key hardware and software features, and various tricks and time-savers. Topics include:

Not a comprehensive iPhone user guide

As its name suggests, iPhone Basics In 30 Minutes does not cover everything about the iPhone. Nevertheless, in a single reading readers will discover new features and learn time-saving shortcuts. The guide also explains how to leverage the iPhone’s increasingly powerful camera and photo-organizing software. 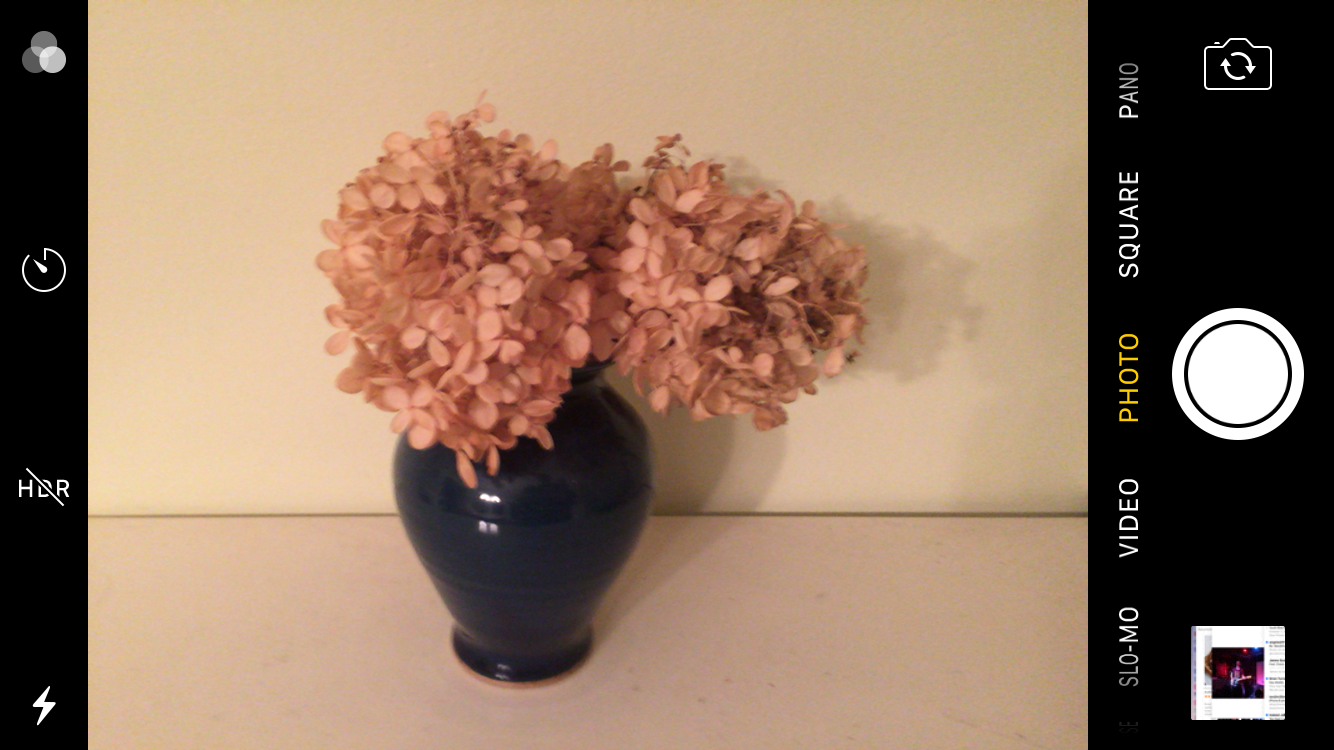 iPhone Basics In 30 Minutes contains updated text and imagery from an earlier title, iPhone 6 and 6S In 30 Minutes, but has been significantly revised to take into account Apple’s new iPhone models and updates to the iOS operating system.

Here’s what real readers have said about the guides:

“A really useful guide full of hints tips and information. You can save yourself a lot of money by following the clear instructions over usage. I would still be struggling to use the phone to its full potential without this book. Highly recommended.”

“Great help for Android users wondering where all the functionality has gone when using an iPhone for the first time.”

To learn more about the title, or to purchase the ebook, PDF, or paperback editions, visit the In 30 Minutes online shop listing for iPhone Basics In 30 Minutes. The book will be updated as Apple releases new hardware and software.

Publisher i30 Media Corp. is pleased to announce the launch this week of Microsoft Word In 30 Minutes: How to make a bigger impact with your documents and master Word’s writing, formatting, and collaboration tools. While most people know how to open a .docx file and start entering text on the screen, Microsoft Word In 30 Minutes is designed to take readers to the next level and leverage Word’s powerful design, sharing, and reviewing tools. 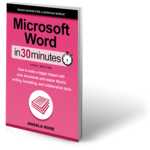 Authored by Angela Rose, the book guides readers through the basics of Microsoft Word, from formatting to printing, before moving on to more advanced features such as collaboration, charts, and tables. Using real-life situations and amusing examples from her own home-based writing business, Rose shows readers how to move beyond simple letters and reports to create eye-catching and powerful documents for work, school, and personal use.

Microsoft Word In 30 Minutes can help turn the average computer user into the local office expert on Microsoft Word, if not an actual power user. The book covers Microsoft Word 2016 as well as Microsoft’s free (but limited) Word Online program. Most of the instructions and examples in the Word guide also apply to earlier versions, including Word 2013 and Word 2010.

The Microsoft Word book is available in paperback and ebook formats through online retailers and can also be ordered through bookstores, libraries, and other outlets.

Angela Rose is a writer and marketing strategist based in Colorado. When she’s not removing cats from her keyboard, you can find Angela searching for the perfect taco, running 5Ks, whipping up original pastry recipes, and hiking the Colorado Mountains with her photographer husband. Angela is also the author of LinkedIn In 30 Minutes (2nd Edition).

i30 Media is the publisher of In 30 Minutes guides – Quick guides for a complex world. Thousands of readers turn to the series to understand mildly complex topics, ranging from genealogy to software. The tone is friendly and easy to understand, with step-by-step instructions and lots of examples. Top-selling titles include Google Drive & Docs In 30 Minutes, Twitter In 30 Minutes, and LinkedIn In 30 Minutes. For more information about the series, visit in30minutes.com. 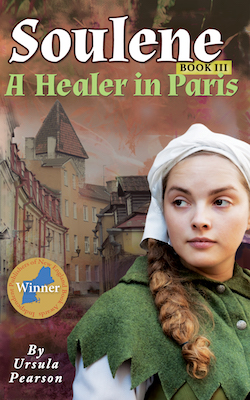 On this blog, I have documented the ups and downs of running an experimental nonfiction publishing venture—i30 Media, which I founded four years ago to publish In 30 Minutes guides. But one thing I seldom mention on this blog or elsewhere is the fact that i30 Media is also a publisher of fiction. I am pleased to announce that one our fiction titles, Soulene: A Healer in Paris, recently received an award from the Independent Publishers of New England for young adult fiction. Congratulations go to author Ursula Pearson, who put in a lot of hard work over a period of several years to tell the story of Soulene, a young healer living in medieval France and England.

You may wonder how a publisher of utility nonfiction got involved in publishing YA fiction. I’ve learned that once you hang out your shingle as “publisher” all kinds of people will approach you for help with their work. As the self-publishing explosion has demonstrated, there is an incredible well of untapped writing talent out there. Unfortunately, the process of publishing a book can be difficult. Not only are the tools unwieldy, but also most prospective authors don’t want to deal with the work associated with editing, formatting, designing, and marketing a new book. So they turn to people with more experience to help them get their books published.

While I have said “no” to most prospective authors who have asked me to edit or publish their works of fiction, I made an exception for Ursula. At the heart of her stories was a strong character, a young woman pursuing a passion to help the sick and injured. Soulene lived in an unjust and cruel world, in which poverty, plagues, and war were a constant presence. Only a small class of educated men (most of them from noble families or the clergy) could ever hope to become doctors. Yet Soulene was able to find an alternate path through a religious order for women, the so-called Red Heart Healers, who specialized in working with the poor of France and parts of England.

Soulene also had a fascinating backstory. I won’t reveal it here, but suffice it to say that it rivals a Mexican soap opera for plot twists, villains, and vengeful plots. Ursula also paid close attention to important historical details, including the types of herbs and plants used for treating wounds and illness, the spread of plague in medieval towns, and even the layout of 13th-century Paris.

These qualities, along with the short length of the books, convinced me to take on Ursula’s trilogy. Book 1, Soulene: A Healer’s Tale, was released in 2013. The following year Soulene: The Art of the Red Heart Healers came out. Last year, Soulene: A Healer in Paris, was released. While the first book required a lot of rewrites and editing, by the third book Ursula had hit her stride. The characters were fleshed out, the dialogue was strong, and the pacing was just right. We found talented graphic artists—Steve Sauer and Malgorzata Godziuk—to handle the covers and interior maps. Reader feedback was great, but I also thought there might be an opportunity to get wider recognition. 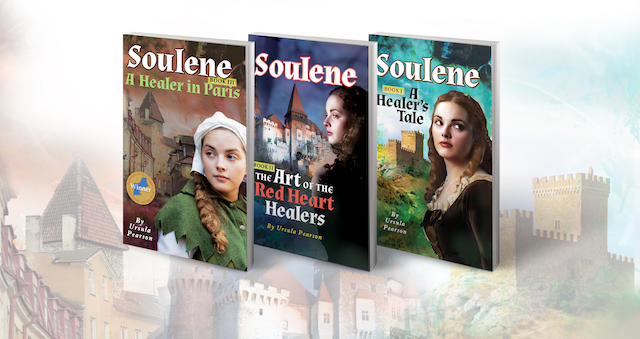 Enter the IPNE Awards. Every year the Independent Publishers of New England holds an awards contest, the winners of which are announced at the annual conference. A panel of librarians handles the judging in more than a dozen categories, which include art, literary fiction, mystery, and several nonfiction categories. i30 Media entered Soulene: A Healer in Paris as well as two In 30 Minutes titles. Last month, Soulene was named a finalist in the YA category, and at the conference in Portsmouth New Hampshire it won the IPNE 2016 Book award for YA fiction. It was a pleasure to pick up the award on the author’s behalf.

Does the award mean that i30 Media will be developing more fiction titles? I am not sure, but I have told Ursula that when she starts work on another book I will be ready to read her manuscript.

To learn more about Soulene, check out the official Soulene.com website.