Apple deserves some blame for the Amazon monopoly

For 15 years, people inside and outside the publishing industry have been warning of an Amazon monopoly. I won’t get into the ancient history here, but lately the buzz has returned with evidence of Amazon screwing one of the larger publishers, Hachette. As I’ve followed the latest news, I’ve been surprised that no one has mentioned how the platform competition — Apple, B&N, and more recently, Google — has contributed to Amazon’s monopoly position. All of these companies could have been strong contenders, which would make Amazon tread far more carefully to avoid pissing off publishers (and some readers). And one of them in particular had a lot of momentum going for it. 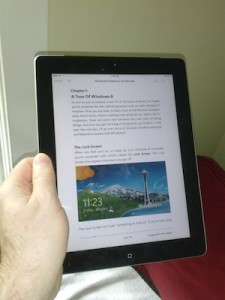 When I first began testing different ebook formats in 2012 for the first In 30 Minutes guide to Dropbox, not only was the iPad hardware superior to the Kindles and Nook, the ePub reading experience in iBooks was vastly better than the same ePub on the Nook or the .mobi equivalent in the Kindles. The ebooks opened quickly and transitioned smoothly from page to page, images were properly rendered, and the ereader toolset was solid.

Where Apple failed was in the purchasing experience (the iBookstore/iTunes mess) and some of the back-end tools for publishing. Fast forward two years, and I have only seen two semi-major improvements to the Apple ereader platform:

These improvements are helpful for authors and publishers. For readers, iBooks/iBookstore/iTunes is still largely unchanged except for some cosmetic changes (e.g., for iOS 7) as well as the release of the iPad mini. Meanwhile, the Kindle Fire has brought Amazon customers a slick alternative to the iPad at a much lower price point. And the Nook platform looks to be fading.

I don’t like having an Amazon monopoly, but some of the blame should be assigned to the erstwhile competitors who can’t seem to get it together. Apple, which has a great hardware platform (iPad/iPad mini), buckets of cash, and huge marketing muscle, doesn’t seem to be forging ahead in the ebooks space. It’s almost as if Cook et al don’t know what to do.

It’s too bad, because this industry clearly needs competitors who can give alternatives to readers, authors, publishers, and other players in the ecosystem. I’d like to think that Google could be up for the task, but it has its own issues to work through.

Dwolla review: Why I love Dwolla, and why I don’t use it more often (UPDATED)