Amazon just announced its Kindle Unlimited subscription plan for ebooks, and boy, does it look great for readers and traditionally published authors. Readers get access to hundreds of thousands of titles for a low monthly price of $10. If you’re a big-name publisher, traditionally published author, or an author published through an Amazon imprint, the terms are great for you, too, according to Publisher’s Marketplace. As long as a reader reads just 10% of your book, you get 100% of what you would get as if the book were a standalone download . Competing subscription plans, such as the one offered by Scribd, don’t come close.

Wait a minute. What’s the payout for authors and publishers who are using Amazon’s exclusive self-publishing platform, KDP Select?

Well, you are out of luck, because Amazon’s terms aren’t nearly as generous. I quote from the email Amazon out to KDP members last week:

In other words, self-published authors in KDP Select are getting paid … who knows? It’s certainly not the 100% enjoyed by traditional publishers and authors on Amazon imprints. It can’t even come close to the 70% that all KDP authors (including those who are not in KDP Select) normally get for a single digital purchase of their book, because the “global fund” simply isn’t big enough to cover subscription reads and the free reads that are part of other KDP Select promotions.

So we have a situation in which one group of authors is getting the gold standard — 100% of what they would get as if they sold the book individually. And then there are the self-published authors in KDP Select, who are providing the bulk of the current Kindle Unlimited catalogue. They are getting some lesser fraction and cannibalizing full-priced digital downloads to boot. On Kboards, some of them have begun to mildly object to this unfair treatment, which surprises me. Self-published authors are getting screwed and they should be vociferously protesting the second-class treatment and terrible terms offered by Amazon.

KDP Select has other issues, too. As described in “Is KDP Select worth it?”, I dropped out of KDP Select after running some experiments and finding paltry sales and reimbursements, and a negligible rankings boost. I also object to the monopolistic exclusivity requirements — authors in KDP Select cannot publish their book on any other platform thereby limiting the ability of their books to reach audiences on those other platforms. The new subscription plan and its lopsided reimbursement plan gives me another reason to steer clear of the plan — and warn other self-published authors to consider doing the same.

Image: The email I received from Amazon about the Kindle Unlimited subscription program: 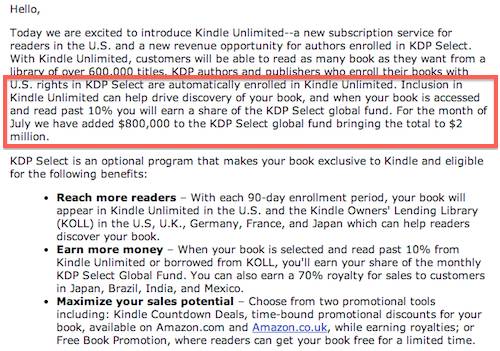 How to renew a Blogger custom domain through Google Apps